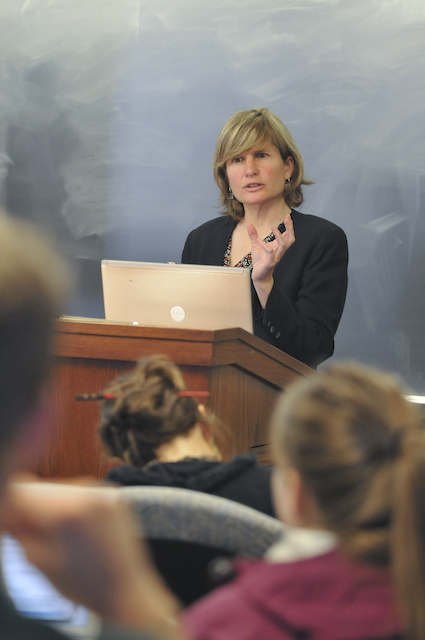 Examples of reproductive health care exceptionalism include the special Due Process Clause rules that the Supreme Court applies to the government’s regulation of abortion. Normally, courts apply strict scrutiny to the government’s restriction of a fundamental right; this requires the government to show that its choice is narrowly tailored to serve a compelling government interest, a burden that the government rarely meets. But while Planned Parenthood of Southeastern Pennsylvania v. Casey purported to reaffirm Roe v. Wade‘s holding that a woman’s decision about whether to have an abortion is a fundamental right protected by the Due Process Clause, the Casey Court nevertheless applied a new, more government-friendly, test to the government’s regulation of abortion. More specifically, Casey announced the “undue burden” test for assessing the government’s restrictions on abortion, a test that is much more forgiving of the government than strict scrutiny—and a test with contours and applications that remain deeply contested, as most recently illustrated by the Court’s fractured opinions in June Medical Services, LLC v. Russo.

For an earlier illustration of how reproductive health care exceptionalism discounts the medical importance of women’s ability to control whether and when they procreate, recall longstanding state laws barring the use and sale of contraceptives, laws eventually invalidated in Griswold v. Connecticut. As Reva Siegel and Neil Siegel have recounted, these laws frequently permitted the sale of condoms as medically necessary because they prevented the transmission of disease—but not contraception available only to women that “simply” prevented unwanted pregnancy. The Connecticut Supreme Court even declined to interpret its state’s statute to permit such contraception when pregnancy would put the woman’s life at risk; as Mary Dudziak has documented, the court instead suggested abstinence as the appropriate remedy. In so doing, these states treated women’s decisions about whether and when to procreate as distinct from decisions about medically necessary matters.

More recent examples of reproductive health care exceptionalism include the Department of Health and Human Services’s new rule that interprets the Affordable Care Act to require covered health insurers to send their insureds two separate bills each month: one singling out the portion of the policy’s premium allocated to abortion-related services (generally a dollar) and another for all other health care services covered by the premium. The rule also requires insurers to instruct policyholders to pay the two premiums separately, either by two separate checks or by two separate electronic transactions.

In earlier work, Professor Hill has explored in detail how reproductive health care services like contraception and abortion are isolated physically, legally, and doctrinally from health care more generally—and how this isolation, this exceptionalism, injures women. Writing in 2016, for instance, she examined how courts and policymakers increasingly treat contraception and abortion as political or ideological choices rather than as health care choices, and how this shapes law and policy in ways that disadvantage women. Among other things, she anticipated the Court’s 2018 ruling in National Institute of Family and Life v. Becerra that invalidated, on First Amendment grounds, California law that required “pregnancy service centers” to disclose two sets of objectively verifiable facts to the pregnant women they sought to persuade to continue their pregnancies to term. First, the law required unlicensed pregnancy service centers to inform women seeking reproductive health care services that the centers are in fact unlicensed because they employ no health care professionals. Second, the law required licensed facilities to inform women that the state offers free or low-cost reproductive health care, including prenatal care, contraception, and abortion. In preliminarily enjoining California’s law, the Court’s 5-4 majority said not a word about how pregnant women would find this information helpful to their health care decisions; instead, it focused only on the interests of the speakers who resisted truthful disclosures while seeking to influence those women’s decisions (I’ve discussed the Court’s exceptionalist Free Speech Clause approach to these issues in more detail here).

Hill suggests that if all reproductive health care decisions—including the decision to prevent unintended pregnancy—were seen as medical matters, policymakers and courts might be slower to single out contraception and abortion for disadvantageous treatment. To this end, she urges that we understand reproductive health care through a medical framework that recognizes these as medical decisions, as well as through an equality framework that understands them as key to women’s political, social, and economic equality.

Essentially Elective furthers this body of work by examining the problem of reproductive health care exceptionalism as illustrated by states’ regulation of abortion in response to the COVID-19 pandemic.

This past spring, government officials in several states interpreted their states’ executive orders that halted the delivery of “elective,” “non-essential,” or “non-urgent” medical treatment to stop or indefinitely delay many (if not most) surgical, and sometimes medical, abortions.

Yet, as a statement by the American College of Obstetricians and Gynecologists quickly made clear, “a delay of several weeks, or in some cases days, may increase the risks or potentially make [abortion] completely inaccessible. The consequences of being unable to obtain an abortion profoundly impact a person’s life, health, and well-being.” Shortly thereafter, the American Medical Association issued its own statement emphasizing that “physicians—not politicians—should be the ones deciding which procedures are urgent-emergent and need to be performed, and which ones can wait, in partnership with our patients.”

The states’ actions prompted litigation seeking emergency relief to keep abortion clinics open—litigation unnecessary to protect any other medical procedure during this period. The results in the federal courts of appeal were mixed: the Sixth and Eleventh Circuits protected a relatively wide range of abortion procedures from the orders’ interference, while the Fifth and Eighth Circuits permitted a smaller number of procedures to continue.

In the medical community, Hill tells us, the term “elective” simply refers to those procedures scheduled ahead of time. But policymakers and the public often understand the term to mean procedures like cosmetic surgery that are not medically necessary. In the abortion context more specifically, policymakers often refer to the overwhelming majority of abortions in the United States—that is, those where the woman decides to have an abortion for “reasons related to [her] unreadiness or inability to parent a child (or an additional child)”—as “elective.” Anticipating the possibility that Casey may soon be overturned (since the various opinions in June Medical make it hard to identify a majority of the current Court willing to preserve it), she predicts that some, perhaps many, states may respond with laws that prohibit “elective abortions” while permitting those deemed “medically necessary.” As Hill observes, “[t]his problematic definition of ‘elective’ abortion is a form of abortion exceptionalism, as it uniquely stigmatizes the abortion decision and adopts a concept of electiveness that would not apply to other surgeries. The notion that abortions chosen for particular reasons are somehow optional or non-therapeutic implies that the natural and expected course for all women is motherhood and that terminating a pregnancy is a ‘choice,’ but continuing one is not.”

To address the problem of reproductive health care exceptionalism, Hill proposes that we “integrate abortion into the health care framework by viewing patients’ abortion decisions as analogous to other patients’ health-care decisions.” To this end, she suggests that scholars and advocates avoid the use of “elective” in this context, and instead recognize that avoiding unwanted pregnancy is a medical decision with a wide array of physical, financial, social, and other life-shaping consequences.

The more we understand decisions about contraception and abortion as medical decisions, Hill concludes, the better to resist efforts to restrict access to reproductive health care—by rendering illusory the distinction between “medically necessary” and “elective” reproductive health care services and by empowering individual women and their health care providers to make these medical decisions free from the government’s second-guessing.